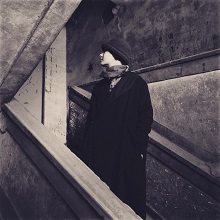 Liang Liang (Pang Xiaoliang), painter, papercut artist, and independent animation director, was born autumn 1985 in Yingkou, a north China port city where the Liao River enters the Bohai (Yellow Sea). At 15 she entered Beijing’s Central Academy of Fine Arts Middle School, after which she graduated from the Beijing Film Academy Animation School. Her work, both papercut and animation, has appeared in numerous exhibitions and galleries in Beijing, Shenzhen, and Los Angeles. She lives in Beijing, where she co-founded the visual art workshop Ji Guang Pian Yu, in reference to the mythical Chinese creature “Auspicious Light”.

My sense of papercut art is that the scissors walk in measured steps, the paper answering as it opens, each engaged in the violence. The act of cutting parts what’s softly offered.

As to the means, one is metal, one fiber. The former are male, with the force of creative destruction; the latter female, its essence equilibrium. However sharp the scissors, however fine the paper, each needs the other to release new shapes, new ideas. This consoles me as I orchestrate such violence on the paper. Before the cut paper is assembled and glued to form the composition, it seems lacerated. But when transfigured as an image that also carries paint, its former silence is broken.

Papercutting traditionally nurtures a process of discovery, guiding artist and viewer on the path from seeing to feeling. For me, making papercut art also leads to a sharper sense of self, a kind of magic loop that also turns outward to others. Its light, humble gestures convey a certain weight.

When asked what use is my art, I sometimes say both positive and negative forces are bearable. Just as some papers can withstand only a spoonful of water, others may hold a bowlful without bursting. I consider how paper is made—the plant fibers broken down, soaked deep, then raised and spread in the sun to dry.  Such is an artist’s life—broken down, sunk to one’s inmost depths. But with trust in some sort of fate, the greater motion of the universe fishes you up, stands you in sunlight, forges you solid and strong. It’s then you gain another shape, another life to make new art, or be made into art yourself. That is to say, art rescues. 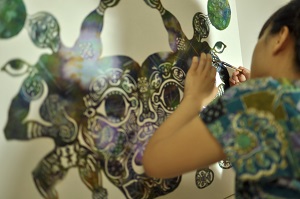 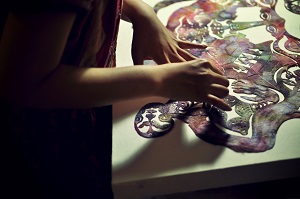